Cholesterol Tests may be sending the wrong message.

There’s a small, but significant revolution going on in our understanding of heart disease risk factor markers.

Most practitioners have a basic awareness of the general comings and goings of cholesterol in the body; that most of the body’s cholesterol is carried through the bloodstream in the form of lipoproteins known as LDL and HDL and that the LDL delivers cholesterol to relevant tissues while HDL removes it from the arteries and transports it to the liver.

Keeping it simple for the public, LDL was generally referred to as the “bad” guy that clogs our arteries while HDL was the “good” guy because it removes cholesterol from the arteries. In the light of recent research it’s time to revise this simplistic view.

We now know that LDL can be fractionated into 7 different types. Two of these are good for you (LDL 1 and 2) and deliver the much needed cholesterol throughout the body. The other 5 (LDL 3,4,5,6,7) are dangerous because they have been damaged in some way due to a poor diet and metabolic “wear and tear”. The body wants to get rid of these types, rapidly shunting them into foam cells which form the basis of plaque in the arteries. These foam cells are strongly causal in the development of atherosclerosis.

The non-harmful, undamaged LDL 1 and 2 are described as large and fluffy (referred to as pattern A) while the damaged, small denser LDLs (1-7) are called pattern B. People with a predominance of pattern B are more likely to have a heart attack. 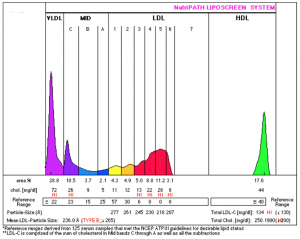 The real issue with both LDL and HDL is the type of protein that wraps around each lipid package and interacts with the vessel wall. In the case of LDL the protein is called ApoB and for HDL it is ApoA-1.

There is only one ApoB associated with each LDL package, so if a certain amount of the LDL takes the form of “large and fluffy” this obviously reduces the possible number of “small and dense” particles.

This provides a straightforward way to assess the ratio between LDLs – large and harmless vs small and dangerous. It’s either one or the other. The higher the quantity of ApoB detected in the blood, the higher the likelihood of small dense particles being present and thus the greater is the risk of damage to the blood vessels. This is because the ApoB amino acids can be, and probably have been, modified by oxidation or glycation, involving many agents which lead to inflammation and plaque formation.

So even though the LDL cholesterol measurement is low, there may still be a problem with large amounts of dangerous ApoB if these LDLs are small and dense.
It’s usually assumed that HDLs are functional and efficacious in removing cholesterol from the arteries. However they too can be damaged and non-functional. In a similar picture to the ApoB mechanism there is only one ApoA-1 protein per HDL package. This protein can also be modified by oxidation or glycation causing a reduced particle size, increased density and decreased functional HDL, although it is not as vulnerable as the ApoB.

It should also be noted that ApoA-1 has many other functions. It is involved in anti-inflammatory, antioxidation, anti-infectious activity and anti-thrombotic functions. It can also initiate the endothelial production of nitric oxide that is vital for vasodilation and can regulate glucose/insulin homeostasis.

All this means that a high ApoB:ApoA-1 ratio can now tell us a lot about heart disease and the risk of heart attack. The higher the number, the higher the risk. No need to worry about units anymore as it is just a ratio. 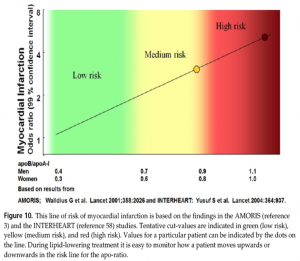 Specialized pathology labs can now fractionate LDLs into their 7 component parts and also measure ApoB and ApoA-1. This gives much more information about a person’s risk of heart disease and should now be added to the more standard measurements of total cholesterol, LDL, HDL and triglycerides.

This entry was posted in News and tagged cholesterol, tests. Bookmark the permalink.